Posted on September 2, 2017 by Vassilis Lambropoulos

As the funeral march for the revolution continues to intone the exhaustion of the emancipatory project, and left melancholy sets the mood of post-revolutionary critique, claims for radical negativity acquire a special appeal in the Trump era. What if not just ideals of liberation but all politics of modernity is bankrupt? 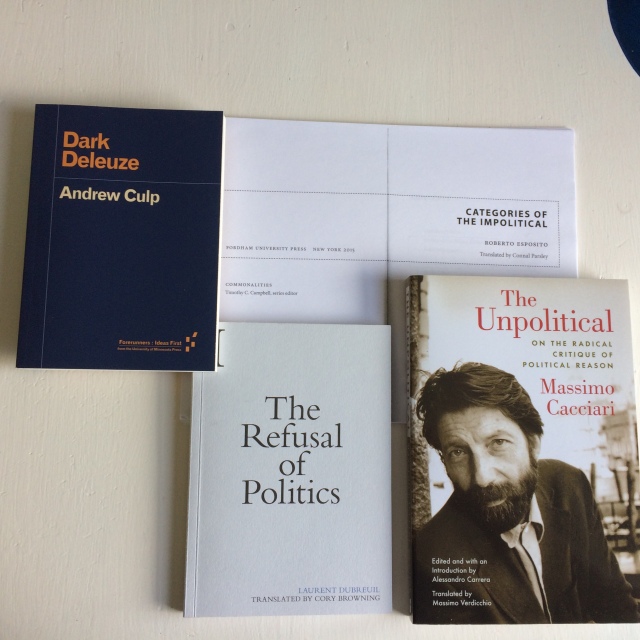 Such negative positions include Cacciari’s groundless “unpolitics,” Esposito’s conflictual “impolitics,” Dubreuil’s refusatory “apolitics,” and Culp’s “cataclysmic politics.” Apart from some limited overlap, these refusonist positions are quite different from recusatory (Bartleby), exodic (Negri), anarchist (May), or accelerationist (Srnicek) ones in that they are based on a total repudiation of everything that stands for politics, declaring, as their terminology indicates, an indignant, implacable, unconditional rejection of all existing political options. The decline of left politics, they argue, is not something to be melancholic about; it’s something to mourn, overcome, and move beyond.

Since the time when renunciatory views emerged in the global “movement of the squares,” Pantelis Polychronidis (a strong supporter) and I have been debating the social efficacy and ethical validity of their stance. Yet it seems that, especially in light of its decline, the left is largely avoiding any engagement with these views which might herald its withdrawal. Thus a defiant resistance discourse continues to prevail, occasionally interrupted by arguments for disengagement. Few activists/thinkers are willing to face defeat, choosing instead to treat the current demoralizing predicament as a temporary setback.

Still, a renunciatory, quasi-apocalyptic thinking which seeks not a counter-politics (such as culture) or an anti-politics (such as morality) but a politics beyond all foundations may reinforse a central question of the squares: If the assembly denounces both the early modern politics of sovereignty and modern biopolitics, and determines to pursue self-rule, how would an immanent governance work?  What politics can keep the multitude gathered and autonomous?  Can the movement govern?