The 1849 Dresden Uprising (Travels in revolutionary Mitteleuropa, from the Rhine to the Danube/7)

Posted on December 11, 2018 by Vassilis Lambropoulos

Standing on the viewing platform of the exterior dome (the famous “stone bell”) of the restored Frauenkirche, I walked around, admiring the winding river Elbe and the Augustusbrücke, the oldest of its Dresden bridges. 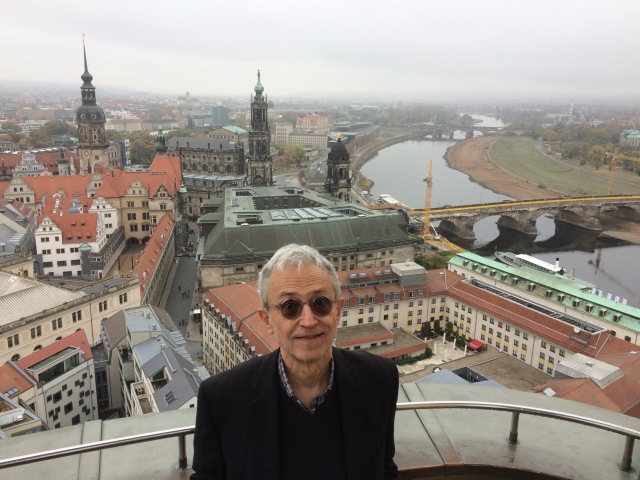 Yet I focused on the area of the old town that is behind me in this picture and its landmarks – the Kulturpalast, the Residenzschloss, the Catholische Hofkirche, the Theaterplatz, the Neumarkt.  I was trying to place some of the barricades where, during the May 3-9, 1849 Dresden Uprising, three thousand citizens fighting for the implementation of the first German constitution, passed by the newly formed National Assembly, were defeated by five thousand government troops under the orders of the King, leaving behind over two hundred dead.

I had written before about this explosive event but now I had a chance to look for Mikhail Bakunin (who had participated a year earlier in the Prague Uprising), composer and conductor August Röckel, and other anarchists in the narrow streets of the old Saxon city, reflecting on that rare moment, at the end of Baden Revolution that had started fourteen months earlier in Konstanz with the “Hecker Uprising,” when Art and Revolution, Beauty and History, seemed to join hands in Dresden and fight oppression together.  I had come to Germany specifically to follow the footsteps of revolutionary friends, architect Gottfried Semper and Kapellmeister Richard Wagner, as I did those of the two comrades in the Caspar Friedrich painting.

Republican Robert Schumann, also a Dresden resident at the time, who had to flee during the revolt with his pregnant wife Clara and their four children, upon their return home in June wrote four marches for piano to celebrate the defiant spirit of the Event.

This entry was posted in Music, Revolt, Revolution and tagged 1848-49, Bakunin, Wagner. Bookmark the permalink.
%d bloggers like this: